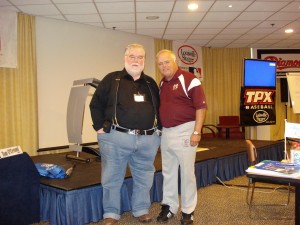 Ronald George (Ron) Polk (born January 12, 1944) was a long-time head baseball coach at Mississippi State and is considered the “Father of SEC Baseball”.

He is by far the winningest coach in school and SEC history in all sports.

On July 28, 2008, Polk was announced as a volunteer assistant coach for the University of Alabama at Birmingham Blazers baseball squad. The Blazers are coached by Polk’s former MSU assistant Brian Shoop.

On March 24, 2009, Polk, along with former Mississippi State player, Rafael Palmeiro, was elected to College Baseball’s Hall of Fame.